The Orthopaedic Hospital of Wisconsin is Pleased to Announce Brandon G. Goldbeck as Our New CEO

The Orthopaedic Hospital of Wisconsin (OHOW) is happy to announce that Brandon G. Goldbeck, former Director of Operations and Clinical Services, has been named Chief Executive Officer.

As an experienced business leader with 25 years of physical therapy experience, Brandon Goldbeck brings new energy and commitment to the success of OHOW.

A UW-Madison graduate with a bachelor’s in physical therapy, Brandon Goldbeck began his career as a physical therapist at Columbia St. Mary’s (CSM) Hospital in Mequon, Wisconsin. He began treating many different patients, and his passion for athletics drove him to excel in orthopedic physical therapy.

Goldbeck grew to become an Operations Lead for CSM, where he began to build foundational leadership skills. During this time, Goldbeck also built positive relationships with team members and physicians, many of whom now make up the Orthopaedic Hospital of Wisconsin.

In 2000, Goldbeck opened his private practice in Cedarburg, Wisconsin. The business began with a small, rented space that his business quickly outgrew.

“I had to build my own building because the support and following were outstanding,” Goldbeck recalls. “Having my practice gave me all the control, but it also gave me all the jobs.”

Goldbeck was primarily responsible for every aspect of his practice for 16 years. During this time, he also earned his Doctorate in Physical Therapy from Boston University. He attributes running his private practice while balancing his continued education to helping him build his strong work ethic.

“When you are self-employed, you are responsible for every part of the business,” Goldbeck said. “It was demanding but also super rewarding because I got all the benefits of helping patients get better while also having control of my business practices. It was a very great experience.”

In addition to running his private practice, Goldbeck attributes his dedication to his upbringing. Goldbeck grew up on a hobby farm in Jefferson County, Wisconsin, and both of his parents were teachers. At an early age, he realized that hard work and dedication were the foundation for success. He also developed a passion for learning that he has carried with him throughout his career.

“As a physical therapist, you deliver treatment, expertise, and knowledge to your patient,” Goldbeck said. “But what I loved is that I always learned something from my patients. I always took something away from my patients that they taught me.”

Before CEO, Brandon Goldbeck Had Many Jobs at OHOW

After delivering successful results to his patients for over two decades, Brandon Goldbeck was approached by the Orthopaedic Hospital of Wisconsin in 2016 to join an initiative to expand OHOW’s off-site physical therapy offerings.

Goldbeck accepted the role and began to manage OHOW’s Cedarburg Physical Therapy Clinic. With the support of OHOW, he expanded the business to an optimal capacity. With the Cedarburg Clinic as a model for success, he took the initiative to grow our off-site clinics. Simultaneously, he achieved his Master of Business Administration from Marquette University to formalize his broad business knowledge base.

Under the direction of Goldbeck, OHOW now operates five off-site physical therapy clinics, with a 6th location to open later in 2021. In addition to expanding physical therapy locations, Goldbeck has proved his dedication to OHOW’s success by offering his support wherever needed.

“When I first came to OHOW, I tried to make sure I was the go-to person for whatever job needed to be done,” Goldbeck recalls. “I did many jobs, and it was a lot of fun getting to know the hospital. From sterile processing and laboratory functions to COVID operations, I was able to see nearly every phase of the hospital operations.”

When the COVID-19 pandemic began, Goldbeck became further involved in all hospital departments as the Operations Leader of the COVID Incident Command Team. He began interfacing with the surgery and inpatient teams and began working more closely with OHOW’s leadership and administrative teams.

William McMullen, Manager of Business Operations, has worked alongside Goldbeck as he evolved from a clinical role to an operational and administrative position.

“I believe Brandon’s background as a clinician paired with his acumen from being a previous business owner will set OHOW up for success and continue the legacy of being a great place to work,” McMullen said. “And, importantly, a great place to receive medical care.”

“I absolutely consider Brian to be my mentor,” Goldbeck said. “He’s taught me so much about being a quality person, interacting with people, treating our staff with high regard, and doing this job as CEO.” 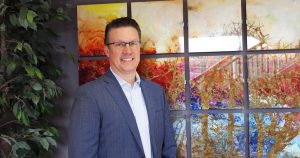 Under Cramer’s leadership, Goldbeck became familiar with the operations of OHOW, including our Three Critical Success Factors: Quality, Patient Satisfaction, and Staff Satisfaction.

“By watching Brian’s commitment to the OHOW Critical Success Factors, I’ve learned to put those factors in front of almost every decision that I make,” he said.

Goldbeck plans to implement our Critical Success Factors in his new role by ensuring that everything OHOW does is of the highest quality. Additionally, he intends to ensure every OHOW patient is satisfied with their level of care and that all feedback is considered.

Among the three factors, Goldbeck notes that staff satisfaction is a particularly crucial factor in sustaining quality and patient satisfaction.

“Making sure that the OHOW staff enjoy coming to work every day really props up the quality and the patient satisfaction. It’s the foundation,” he said. “If you don’t like coming to work, I guarantee your patients are going to notice that.”

Brandon Goldbeck plans to uphold his commitment to staff satisfaction by continuing to survey staff, listening to their suggestions, providing staff luncheons, and celebrating staff achievements and milestones. One of his primary initiatives to elevate staff satisfaction is to have an open dialogue with all the OHOW staff members to improve processes at OHOW.

“I want to make people feel that they can talk to me, visit with me, ask questions, and they will be heard. I want staff to feel that they are a critical part of OHOW’s success.”

The Orthopaedic Hospital of Wisconsin is proud to welcome Brandon Goldbeck in his new role as CEO. We look forward to continued achievement under his leadership as we strive to provide patients with the best orthopedic care possible.

The Orthopaedic Hospital of Wisconsin is on top of their game! The environment and staff made surgery a pleasant experience.

I am totally impressed with OHOW from the beginning to my discharge date. I felt I was given all the information I needed to feel comfortable having a successful surgery and post-op experience.

I couldn’t ask for a better hospital or doctor. The call I got the day after surgery from the hospital and three days later from my doctor were the ‘extra’ that makes this outstanding.